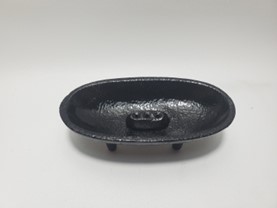 This is a cast-iron incense burner that can be used with either cone or stick incense. Size 4" long

Black is the absorption of all color and the absence of light. Black hides, while white brings things to light. What black covers, white uncovers.

Incorporating magickal objects into rituals and spellcraft, a piece of iron is essential; many altars have at least one piece of iron placed upon them. A cast-iron cauldron is traditional and a handy tool for any modern witch, for tasks ranging from burning herbs and incense to magickal scrying and divination to kitchen witchery and cooking magick. Iron is a symbol of strength, protection, and life-giving warmth, as it is seen as a combination of Earth and Fire elements.

Using the Cast Iron Canoe Smudge Pot combines the effects of the herbs being used with the protection and strength of Iron.

Spells and rituals for strength can benefit from including the use of the Cast Iron Canoe Smudge Pot as Iron is a metal that symbolizes strength.