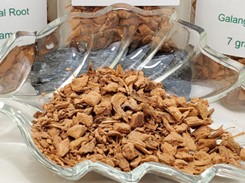 Has been used in a sachet while going to court to gain favor as well as when taking part in events of profit. Spells and rituals can call for using Galangal Root around a home or in a bedroom.

Burn as incense to remove evil spells and break curses. Carry for protection, to improve psychic abilities, and to bring good health. Carrying into court may make the judge or jury feel sympathetically inclined toward you. Wrap money around the root, and it will multiply threefold. Burn carefully for 14 days before a court case, saving the ashes and bringing them to court in a green flannel bag for luck.

Galangal's rhizomes are pale sand-colored with earth-tone rings on their semi-rough surface. Its flesh is ivory to yellow in tone depending on its maturity. It has a floral and spicy aroma with earthy, woodsy, and mustard-like flavors with subtle citrus undertones. Its appearance gives the first impression that it is, indeed, related to ginger. Both forms of Galangal Root are knobby, wild-shaped, fibrous, and firm with similar textured and colored flesh. Their relation and appearance are where the general similarities end, though.