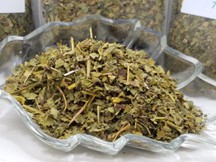 Golden Seal is listed as an endangered species since 1991, making it a rare and expensive botanical. It is a powerful Guardian and Healer and provides Strength and Protection to those who possess it. It is used by many for Warding Off Evil and bringing Good Luck, especially in Health Matters. Place Goldenseal Root in a white flannel bag along with Angelica root, anoint this bag with Holy Oil or Blessing Oil sew it into the mattress of a loved one that suffers chronic pain, serious disease, or acute illness for Protection and Healing.

Golden Seal is associated with Venus and the element Fire. It has been used for attraction and is commonly used in spells, rituals, and candle magick (sprinkle this herb at the base of a green or gold candle) to attract money, wealth, success, prosperity, and before any business dealings and financial matters. It is also a powerful stimulant for the immune system.

Golden Seal has been used as a protective guardian for both physical and spiritual dangers. It is known as a powerful money protector as well as a formidable healer for bodily ailments.

Golden Seal has a long history as a healing plant among the native people of the northeastern United States. The Cherokee used it to treat cancer, "general weakness," "digestive disorders," to improve appetite and as a tonic and wash for inflammations. The Iroquois used the roots to treat whooping cough and diarrhea, liver issues, fever, sour stomach and gas, and nausea. They prepared an infusion with other roots for the treatment of earache and a wash for sore eyes. They were mixed with bear's grease for insect repellent. Native people also valued the yellow roots as a stain and dye.