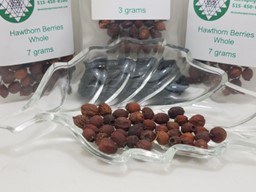 Hawthorn is used for treating heart and blood vessels such as congestive heart failure (CHF), chest pain, and irregular heartbeat. Hawthorn is also used to treat tapeworm and other intestinal infections.

*May interfere with digitalis medications.

Fishermen have been known to carry Hawthorn Berries with them when headed out fishing for luck in a successful trip.

Those wishing to make an offering to the Fey should consider using Hawthorn Berries as the Hawthorn is said to be one of three sacred trees to them.