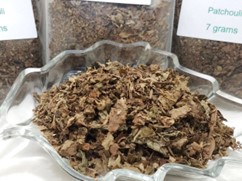 Patchouli Leaf is a part of the mint family, the most used portions of the plant are the dried leaves and the essential oils. Some use the stems as well. When grown, the patchouli bush reaches about three feet tall and has purplish-white flowers. The essential oil of patchouli is potent and has a deep, musky scent. It is connected to the earth and is considered associated with feminine energy.

It is used in various spells and magical workings for love, wealth, and passion. Patchouli smells like earth and is associated with rituals & spells for money and prosperity. The oil can be sprinkled onto money, added to purses and wallets, and placed around the base of green candles. Patchouli is used in fertility spells and rituals. It is commonly added to love sachets and baths. It has been used to attract people and to promote lust.

Patchouli is most commonly used in money spells. Legend states that Saturn, the god of hard work, rewards, and limitations, governs patchouli. To honor him, money spells should be performed on Saturday, the day of Saturn.

Patchouli is a well-known aphrodisiac and is incorporated in lust and love spells. Wearing patchouli oil is said to attract love. You can use the root instead of wearing the oil. Placing the root in a bag and carrying it in a pocket or as a necklace.

Patchouli is used in modern magic to fend off the power. Anoint windows and doors with Patchouli oil, or you can take the leaves and scatter them, making sure that any negative influences stay away. It is excellent for self-defense magic.

Various essential oil blends are known for protection, love that can be linked with it. It can be used to make:

Combine dry Patchouli leaves and mix them with other herbs and use them as incense. You can make blends for:

Patchouli Leaf is a Mood Enhancer. Studies have shown that inhaling Patchouli essential oil stimulates serotonin and dopamine production, the feel-good hormones that help eliminate feelings of anxiety and anger. It can be used as a sedative, aphrodisiac, and aide for digestive health. It has anti-inflammatory properties and is an insect repellant. It has also been shown beneficial for skin and hair.