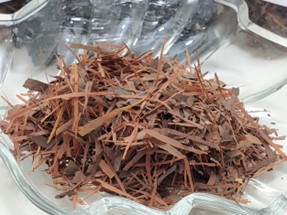 Pau D Arco (Tabebuia impetiginosa) is native to Central and South America; it is a canopy tree that can grow over 125 feet tall. The history of uses of this product dates to the Incas. Several tribes have used it to make bows for centuries. Several native names mean "bow stick" or "bow stem." Pau D Arco is the bark of a large evergreen tree found in the Amazon, South America, and Latin America. Its use as an herbal remedy has a long history with the indigenous populations in those areas. Recently Pau D Arco has found its way across the globe; it is used in various cultures for an array of ailments.

Pau D Arco herb is one of the many potent herbs that come from the rainforests. It is used widely in Herbal Tea, Tinctures, salves, and tablets.

Pau D Arco herb has been believed to be used for antiparasitic, antiviral, antibacterial, antifungal and anti-inflammatory, antioxidant, astringent, and laxative.

It has a long association with ritual healings. Used in various herbal magick spells and is commonly used in alternative religious practices.

Like cat's claw, pau D Arco tinctures are to be taken in water with lemon juice so tannins can be absorbed via the colon. Pau D Arco is said to be anti-cancer and antimicrobial, especially anti-candida. It has been used to treat diabetes, ulcers, stomach inflammation (gastritis), liver ailments, asthma, bronchitis, joint pain, hernias, boils, and wounds. Pau D Arco is an essential resource from the rainforest with many applications. It contains Anti-Tumor inhibitors that may be effective against several types of cancer, including lung, breast, colon, prostate cancers, and malignant melanoma. Compounds like camptothecin and topotecan beta lapachone that inhibits DNA topoisomerase I.

It is Antimicrobial and Antifungal. A study conducted in the 1940s found that lapachol at 100mg/ml concentration can inhibit the uptake of oxygen in Plasmodium Knowles by 74% and the succinate oxidase system by 26%. This led to the conclusion that lapachol exhibits antimalarial activity against Plasmodium lapohurae via respiratory inhibition.

Pau D Arco has been used as an analgesic.

It is an Antiviral: Lapachol has been effective against certain viral strains, including herpes virus types I and II. Documentation has shown Naphthoquinones are effective against four strains of the flu, polio, and vesicular stomatitis virus.

As for its Anti-inflammatory and antipsoriatic activity: T.avellanedae is believed to inhibit the histamine-releasing cells, which leads to anti-inflammatory effects. According to one in vitro study, lapachol and its analogs were shown to have an antipsoriatic effect by inhibiting the growth of human keratinocyte cell line HaCaT and reducing inflammations.

This herb has Antiparasitic activity: A topical barrier, Lapachol, and its trematodes, specifically Shcistosoma mansion, which causes schistosomiasis.

Native shamans use Pau D Arco in aphrodisiac mixes and is an adjunct plant in Ayahuasca brews. It is used in healing rituals and is regarded as a rejuvenating tonic.