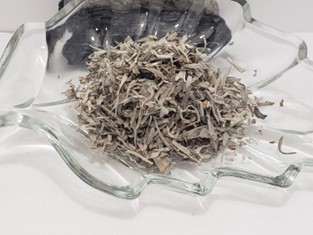 Blue Sage is widely used for cleansing and purification purposes, it provides spiritual strength, and sometimes it is used during exorcism rituals to remove the evil spirits.

Blue Sage Leaf is a hardy bush found in the deserts of the Southwest, named for its abundant blue flowers, but the leaves have a blue-ish cast as well. Its thin leaves have a fragrance that is both herbaceous and floral, similar to Lavender.

A close relative of White Sage, Blue Sage is good for healing and cleansing rituals. Its soothing, relaxing smell is used to aid meditation or burned for enjoyment. Not as pungent as White Sage, it is more agreeable to some folks who find White Sage overpowering and strong.

Using Sage to cleanse a home is deeply rooted in Native American history. They used it for many purposes, including healing, energy cleansing, removing negative energy, and ritual ceremonies. Historically, Shamans have used Sage to clean people who were ill and bring them back from negative spaces where their body and soul resided.

Today, Native Americans use it in sage cleansing ceremonies for seeking balance and pure thoughts.

How To Sage Your Home

Burning Blue Sage Leaf allows the removal of most negative energies and experiences from the room—work one room at a time. Start by opening the windows and doors to provide negative energy to escape. Light the sage smudging stick until it begins to emit smoke. Keep your intentions in mind as you make your way through the home, moving in a clockwise direction moving through the house. Continue until peace and love begin to fill the home while sending the negative energies away. While you are using Blue Sage Leaf to sage your home, make sure that you keep a strong and focused intention in mind.