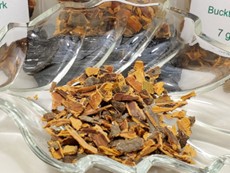 Buckthorn, also referred to as black alder, is an herb that comes from the bark of the stems and branches of the rhamnus frangula tree.

Buckthorn Bark has been used in many different uses of protection. It is said that Buckthorn Bark can protect against any type of enchantments or spells directed towards a person's home if hung or placed by the doors or windows.

According to old teachings Buckthorn Bark is used to call elves to a person, if the person sees the elf then a wish is to be granted. Buckthorn Bark can also be used in spells or rituals for the casting and granting of wishes.

Those believed to bear bad or ill luck should get or be gifted some Buckthorn Bark as it is said to bring good luck to whoever carries it. Buckthorn Bark has been said to assist in recieving positive news in court when carried in a sachet or  charm.

Those who are wanting to cleanse themselves or homes of negative entities can add Buckthorn Bark to their exorcism spell or ritual. Healers can use Buckthorn Bark to perform an energy exorcism on those that require energy healing.