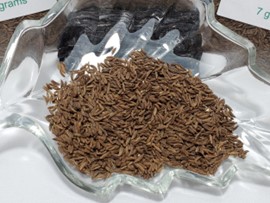 Caraway Seeds are thought to be a powerful Protective and Healing, especially for children. They are used by many cultures for Warding Off the Evil Eye, which may harm babies, bringing Good Luck to children in Health Matters.

Need to keep stuff from being messed with? Then use caraway. It is thought that anything that contains a caraway can’t be stolen, so put a pinch of it in a wallet, purse, or car can help deter thieves.

In Germany, it was sprinkled on coffins to keep evil spirits away from the dead. Placing a dish of it under a child’s crib is said to keep witches away. The seeds are even mixed into animal feed to keep chickens and sheep from wandering away!

Caraway is used as a love herb. Chewing the seeds before kissing someone is believed to entice them to fall in love with you. Can be used for spells and rituals to ensure a person's loyalty or even used in foods to ensure the fidelity of a couple. When used in food it is said that Caraway Seed can induce an effect of increasing the lust of those who ingest it. Spells and rituals using Caraway Seed to affect a person's lust are said to be most effective when performed in a bedroom.

Bathing in an infusion of caraway can remove the spiritual causes of disease.