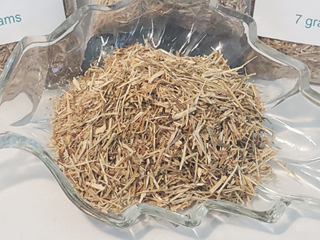 Centaury has been considered one of the most useful bitter herbs. It works on the kidneys and liver, purifies the blood, strengthens digestive function, increases stomach secretions to assist with the breakdown of food, stimulates the appetite, and increases bile production. Centaury has an intriguing history of uses, and according to legend, it was named because of the mythical centaur Chironia who cured a poison arrow wound with the herb. Because it is so bitter, the ancient Romans called it the 'bile of the earth' (fel terraae), and the Anglo-Saxons named it feverwort because they utilized it to treat fevers and snake bites.

In folk medicine, Centaury was employed to strengthen the bladder and prevent bedwetting, constipation, colic, anemia, gas, heartburn, delayed menses, lose weight, destroy head lice, gout, and digestion. Centaury was considered a panacea and was recommended for virtually any medical condition or disorder. Farmers historically added this herb to the fodder of their sick or emaciated cows, horses, and chickens and washed their wounds with a cooled infusion.

Centaury Root is said to have gotten its name from the Centaur Chiron, when used in rituals and spells it is said to repel anger allowing for a calm mind much like the teaching of Chiron to the heros in Greek mythology.