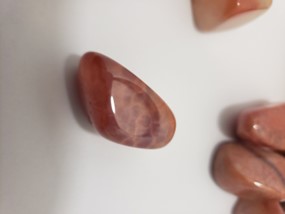 Fire Agate, known as the spiritual flame of absolute perfection, carries a great mystery locked inside its deep brown crystal. You need only touch the stone, and fiery embers ignite. Peer into its depths, and flames leap within its chambers. Study it closely, and it will almost show you its secrets. Almost.

Fire Agate is a variety of Chalcedony, a mineral of the Quartz family. It has a translucent deep reddish-brown base, with flashes of orange, red, green, and gold that appears as living flames within the gem. Its iridescent colors are caused by light interference on thin layers of iron oxide or limonite crystals within the Chalcedony.