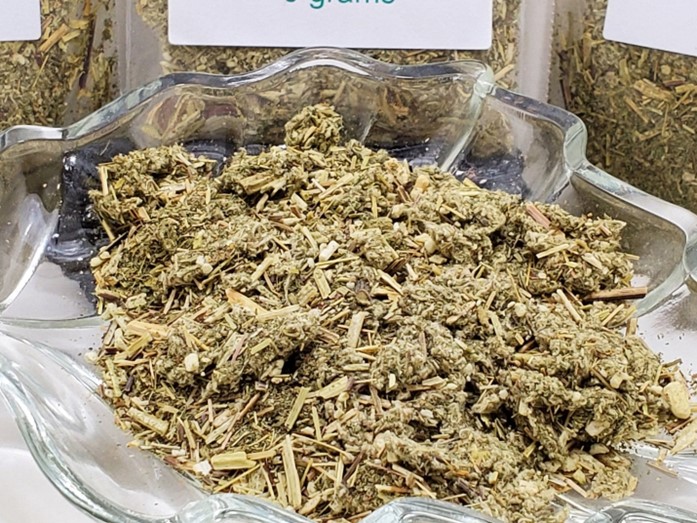 Green Mugwort is from the leaves and stems of the plant.

Used to encourage dreams and visions, it is known as an herb of introspection and inner healing. When burnt before bedtime, it aids in restful sleep and pleasant dreams. It is used for astral travel, shamanic journeying, and protection during such excursions.

Mugwort is associated with divination and dreaming if someone has overactive dreams. Using dried Mugwort in a ritual setting brings about prophecy or divinatory needs. Mugwort under your pillow to prevent astral attacks or to ward off psychic attacks from those who would do you harm. It’s known as a psychic/Lunar herb that’s also strongly protective.

Mugwort is mentioned in the Nine Herbs Charm, a 10th-century English rhyme of beneficial herbs. Later, it was associated with St. John the Baptist, and wreaths of Mugwort were worn to repel evil spirits. Mugwort is also known as Black Sage and is considered to be an exorcism sage and herb.

As a folk medicine, Mugwort was ingested, smoked, or applied to the skin in a poultice. Mugwort has anticoagulant and disinfectant properties and has a nerve-calming effect. It was used as a poor man’s substitute for expensive tobacco, giving rise to the nickname “sailor’s tobacco”, Green Mugwort is still smoked to this day, in fact our herbalist Dragon's Eye smokes Green Mugwort as a way of assisting with easing pain.

A search inThe National Library of Medice for Mugwort reveals that Green Mugwort can be used for easing digestive issues.

Green Mugwort contains the chemical thujone, which is a mild intoxicant.