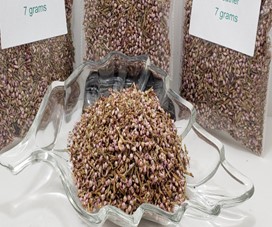 Heather has a long history of medicinal and spiritual uses that dates back over a thousand years. It is cultivated by many cultures for its fairy magick.

It has been used in baths to tone muscles and soothe pain. Heather is both an antiseptic and a diuretic, so please use caution.

Today Heather is used for treating nervous complaints, cardiac palpitations, migraines, and problems associated with menstruation. The essence from its flowers is an aid for the self-obsessed with no thoughts or time to give to others; it promotes the spirit and a better awareness of other's needs.

Heather can open portals between this world and the fairy world. The Fae associated with this flower is often attracted to shy people.

White Heather is the luckiest and protects against violent assault, especially rape.

Sleeping on a pillow stuffed with this magick herb may bring dreams that foretell good fortune.

It has been said then when Heather is burned outside with fern, it brings rain.

In Ireland, it has been used to conjure the spirits of the dead.

Heather is both helpful to those who shapeshift and protect against harmful shifters.

Heather Flower is used in some practices as an ingredient for sachets and charms  when going to places of chance or when a boost to a person's luck is desired such as court or a casino.