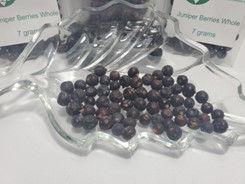 Juniper Berries, Whole has been known as our closest magical plant ally since Neolithic times. Juniper was mentioned in the ancient Egyptian papyri; its fragrant wood, needles, and berries were used as incense and medicine. Juniper is said to have the power to ward off evil. It has been said that no demon or devil can withstand its power, not even the demons of disease. Sterilize a space with Juniper will kill off germs and purify the air in a sick room.

When the Black Death ravaged Europe, Juniper was one of the most promising and effective protectors. It was considered a guardian of the threshold between this world and the next. Similar to Yew, it is said to nurture the souls of the dead while waiting for them to reincarnate. They used to be planted on graves for that reason. In Egypt, they played a role in the mysteries of the dead. Juniper berries have been found in the sarcophagi and in the hand of pharaohs as if they intended to pay the ferryman with seeds.

Folks respect Juniper so highly that they would nod in passing.

It has been said to help retrieve lost objects, protect against venomous creatures, guard against spells of faintness and weakness, to name but a few. In times of old, the uses were based on practical evidence. Juniper repels biting insects. Its stimulating properties preserve the spirit and prevent dizziness and weakness. Today, its 'spirit preservation' is known for its unique flavoring for Gin. Juniper is a common spice, particularly favored for greasy meats.

Many cultures use it as incense for healing rites and to purify the sick room. Meditating with the smoke, leaves, or berries helps focusing and concentration and is associated with prophecy and divination. Juniper has been used in rites of passage and as a protector on shamanic journeys to the Otherworld. An excellent herb for getting in touch with the deities and spirits of nature.

Juniper berries have been used for intestinal complaints, including parasites, though large amounts may irritate the stomach and intestinal lining. Juniper has a strong diuretic action and may be useful for urinary tract infections. 1-2 teaspoons of the crushed berry steeped in hot water for 10 minutes can be drunk 2-3 times a day for up to four weeks.

Juniper Berries, Whole has been used in a vapor rub or a diffuser for colds, coughs, bronchitis. It has been added to soothing salves and massage oil for joint and muscle pain. It is used in topical preparations to treat eczema, psoriasis, acne, fungal infections and for the prevention of infection.

In Central Europe, Juniper Berries, Whole and rue were burned in Walpurgis Night to keep away "witches." Juniper in Siberia is used for ritual purification and blessing of sacrifices, ritual objects, and people and animals.

Juniper is an ingredient in Kyphi (Kapet), the incense used in ancient Egyptian temples and households.

Jupiter wood is burned during divination.