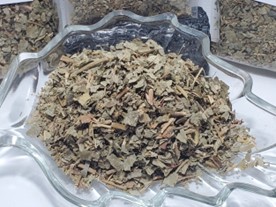 Lady's Mantle is used to help women to move away from the past, to climb out of ruts and the person they are really supposed to be. It is an herb to use when trying to learn from painful experiences, aiding in gaining the courage to take the first step. The herb brings courage to women, especially for matters associated with childbirth.

Lady's Mantle can encourage creativity and connect with feminine energy.

Lady's Mantle is used in love spells, potions, and amulets. It is said that when carried, it can attract love. Originally a herb of Freya, this herb is used in fertility magic and for protection. As Lady's Mantle is still considered to be an herb associated to Freya, placing it on an altar for her is said to assist with building and strengthening a connection to Freya.

Lady's Mantle is associated with fairy lore. Some say that the fairies appreciate the sacred dew, which they collect and drink as a magical elixir.

With Lady's Mantle being said to be a favorite to the Fey, it is commonly used in spells and rituals for communication with them or to summon them for assistance.

With the use of Lady's Mantle in sachets to attract love a person could also place Lady's Mantle on an altar to the Greek Goddess Aphrodite to either build a connection with her or as an offering to garner the favor of the Love Goddess. Spells and rituals can be used with Lady's Mantle to call on Cupid to bring a lover or to target a person to feel the love they are missing.