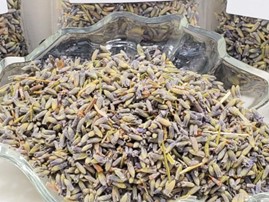 Lavender has been used for hundreds of years in love spells and sachets.

It is also used in healing mixtures, carried to see ghosts, worn to protect against the evil eye, and added to baths for purification.

Lavender Flowers are known for soothing, calming the mind; it promotes relaxation and sound sleep. The oil of Lavender Flower is antiseptic, antibacterial, and antispasmodic. Lavender essential oil is used for a broad spectrum of ailments and conditions, ranging from eczema to menstrual cramps, from burns to back pain. Lavender is also known to help reach the Delta cycle of sleep-promoting a restful and healing slumber.

Lavender Flower can be used for both attracting or pushing away entities in loctations. Meditation while burning Lavender Flower or using Lavender incense can assist with opening and cleansing the Crown Chakra allowing a person to reach a higher state of consciousness and connection to the Higher Divine energies.

Lavender Flower is a common offering to the Orisha down in the Brazilian Candomble. The Chinese have a Deity that is strongly associated with Lavender Flower, Yang Wanli, God of Lavender.

Lavender Flower is used as a symbol of love and can be used to build a connection to Deities of love such as Aphrodite from the ancient Greek pantheon.