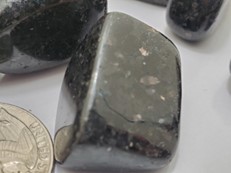 Nuummite is the oldest mineral on Earth. It was formed over three billion years ago from volcanic origins. Its unique combination of Anthophyllite and Gedrite metamorphosed into tightly inter-grown crystals of charcoal gray to black with iridescent flashes of gold. However, its iridescent display can include red, orange, yellow, green, silver, blue, and violet.

It is named for the remote, rugged mountain area north of Nuuk, Greenland. It was discovered there in 1982 and is still meticulously mined today. Similar rocks have been found in Canada and the United States, however only the rare Greenland variety has color developed enough to be proper for gemstones.

Nuummite is for empowerment, allowing one to see beyond facades and recognize what lies beneath words, actions, self, and others. It helps to delve deep into the psyche and discover the hidden hurts, fears, guilt, or shame within the subconscious and hold one back.

Nuummite is known as the Sorcerer's Stone. It draws the fiery energies of ancient Earth and combines it with the elements of Storm. Black as night shadows upon moonlit water, this talisman shimmers with mystical gold light, lifting the murky to see what lies beneath. It is a stone of personal magic, increasing synchronicities, luck, clairvoyance, and intuition. The energy of this stone is intense, so use caution when selecting this stone. It permits journeying deep into the personal psyche, presenting a clear vision of one's true self. It aids in releasing energies trapped in the subconscious and brings the gift of inner power, and self-mastery.

Nuummite is an excellent grounding stone, attuning to Earth's elemental forces to be drawn upon in times of need. It is an excellent source of strong electromagnetic fields. It aligns the subtle bodies, strengthens the auric shield, aggressively protective against negative energies, manipulations, and environmental pollutants.