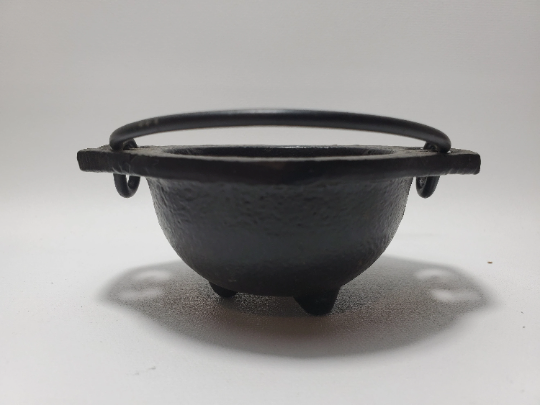 Black Color Association -  The color black relates to the hidden, the secretive, and the unknown, and as a result, it creates an air of mystery. It keeps things bottled up inside, hidden from In color psychology this color gives protection from external emotional stress. Black - Creates a barrier between itself and the outside world, comforting while protecting emotions and feelings, hiding its vulnerabilities, insecurities, and lack of self-confidence. Black is the absorption of all colors and the absence of light. Black hides, while white brings things to light. What black covers, white uncovers.

For heavy protection, place small pieces of Iron in each room of the house or buy at the four corners of your property.

In earlier times, Iron fences were sometimes used to halt the flow of energy into the home.

Wearing Iron or carrying a small piece enhances physical strength and is an excellent talisman for athletes.

Iron is also used in healing rituals. A small piece is placed beneath a pillow at night. This was done to scare away the demons that caused the disease but can be thought of as strengthening the body's ability to heal itself.

Incorporating magickal objects into rituals and spellcraft, a piece of iron is essential; many altars have at least one piece of iron placed upon them. A cast iron cauldron is traditional, and a very useful tool for any modern witch, for tasks ranging from burning herbs and incense to magickal scrying and divination, to kitchen witchery and cooking magick. Iron is a symbol of strength, protection, and life-giving warmth, as it is seen as a combination of the elements of Earth and Fire. Iron was once the most durable metal known to man, and this was reflected in mythology and folklore as well. Thor's hammer Mjolnir was forged of iron, and even in the Norse myths the legendary heat retention properties of iron were demonstrated: the hammer would become so hot when thrown, Thor wore iron gloves to protect his hands. The legendary strength and durability of iron make it a natural component in spells of protection. Many a witch obtains items of iron, such as antique keys, padlocks, or spikes, and places them by the door of his or her home in order to keep out poltergeists and other unwanted spiritual visitors.

Ritual – there are many rituals that use cast iron cauldrons.

Magic – there are many spells and magical work which can be aided by the use of cast iron cauldrons.

Offering bowl – placing floral, food, or other offerings in your cast iron cauldron and placing it on your altar is another popular use.

Incense holder – much like holding candles, you can place long incense sticks in your cast iron cauldron by partially filling it up with sand. It’s a fairly safe method to burn incense and will keep the ashes in one location.