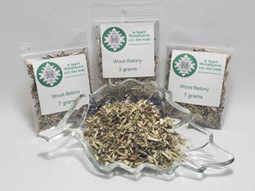 Wood Betony, also known as Lousewort, has been used to protect against evil spirits and diseases of the body. It can be used as a shielding and reversing bath against witches and the work that they do.

Betony can be added to any protective mixtures, grown around the home, or carried for protection from negativity, misfortune, and hexes. It can be scattered near doors to prevent unwanted energy and people from entering and has been planted in graveyards to prevent evil spirits from escaping.

Betony stuffed into a pillow or placed underneath is said to prevent nightmares and night terrors. Wood Betony works well against the darkness because it blends with energy & emotions, building a protective barrier from fear. It helps to raise vibrations to a higher level, thus warding off lower energies.

A tea or tincture of Wood Betony has been used to dispel headaches, anxiety, influence better sleep & resolve toothaches. It is said to calm anxieties by lowering blood pressure.

Purification and protection - of the soul, not the body. Betony has been carried throughout centuries for protection against demons and was also thrown onto Midsummer bonfires so that people could jump through the purifying smoke. It is said to shield against evil visions and dreams, suggesting that it may be consumed by those who are troubled by unwanted out-of-body nocturnal experiences or plagued by dream visitations.

Betony is a protector of the astral body. Before journeying or spiritual walking, wash in an infusion of Betony, then drink some of it. Sprinkle it on the bed before laying down if you are traveling; carry it if you are path walking.