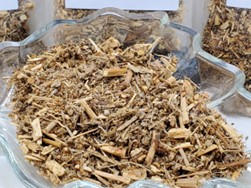 The name wormwood refers to the use of this plant to cure intestinal worms.

Macerate Wormwood and soak in wine for several days, then strain to induce visions and aid in astral projection and divination. Place several tablespoons of dried wormwood leaves and flowers in a jar, cover with light olive oil, and seal. Let this mixture steep for several weeks in a cool place, strain, then use it as an anointing oil for yourself or your divination tools.

Wormwood is used in spells to send harmful magic back on its sender and for vengeance spells.

Combined with Mugwort burned, it helps call up spirits. Ensure the area is well-ventilated as the smoke can be very irritating to the eyes and throat and is toxic if inhaled. It is also helpful in banishing spirits.

Wormwood may be used in love magic. Wormwood has been a prevalent healing herb in ancient times and remains popular with herbalists. It is not the safest herb in pharmacopeia and use with extreme caution and under the expertise of an experienced herbalist.

Wormwood has been used to treat intestinal worms, stomach pains, gas, indigestion, nervousness, gout, kidney stones, liver disorders, fevers, and general infections. It is also used to stimulate hunger and improve digestion and strengthen the immune system. In addition, Wormwood was used to strengthen contractions while easing labor pains and bringing on delayed menstruation and relieve related bloating symptoms. It can also be used to cause abortions.

Wormwood was recommended treatment for the stings of bees, wasps and scorpions, and snakebites. Wormwood has shown some promise in studies relating to the treatment of Crohn's Disease.

Pure wormwood oil is hazardous and should not be taken internally. Do not use wormwood essential oil. Use the dried or fresh leaves or flowers only.

Do not take Wormwood for more than two weeks at a time.

Pregnant women who would like to stay pregnant and women trying to become pregnant should not use or handle Wormwood.

Side effects and signs of reducing or discontinue the use of Wormwood include nausea, vomiting, insomnia, excessive thirst, restlessness, vertigo, dizziness, trembling, numbness of the extremities, delirium, paralysis, convulsions, and seizures.