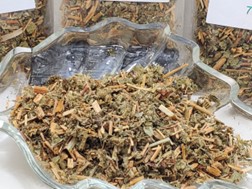 Use in protection sachets and spells, banish negative energy and spirits.
-Reverse spells and hexes and sends them back to the originator.

It grows abundantly in England, Europe, and parts of North America. The folkloric name is Cocklebur and is distantly related to the Rose.

Agrimony was known to the ancients as a heal-all tonic, easing everything from cataracts to sore feet. The herb was steeped in baths or consumed as tea. Nicholas Culpeper's Complete Herbal (1653) recommends cleansing sores with an infusion of Agrimony. Agrimony tea is sometimes taken as a refreshing Spring beverage.

The occult legacy of Agrimony is harder to trace. Its protective reputation may be related to another traditional name for the plant, Church Steeple. Many plants that resemble holy objects were thought to have the power to repel evil spirits.

Our herbalist Dragon's Eye picked Agrimony for some of his mixes due to the protective and counter spell properties of Agrimony. One of the mixes that Dragon's Eye used Agrimony in is his Attachment Blend, this blend makes use of the said ability of Agrimony to break jinxes.

Agrimony is added to ritual baths to assist in cleansing a person as well as grant a boost to the strength of their spiritual energy. In ancient times Agrimony was considered to be a heal all herb and was used in the creation of tonics and tinctures.

The actual occult use of Agrimony is concealed in the shadows and not as easy to trace. However one of the names that Agrimony is known by may explain why it has such a heavy use in protection spells and rituals. The name is Church Steeple, as this is what some see when looking upon Agrimony the association to a Holy object could be why some use Agrimony in cleansing rituals to push out negativity.