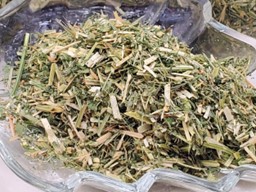 Alfalfa Medicago sativa is a pasture plant in the legume family. It is believed to bring about good fortune in money matters, may keep poverty away, and prevent financial troubles.

Alfalfa is an ancient herb that has a long history of use in prosperity magick. Alfalfa, known as Lucerne in Europe, can lower cholesterol and purify the body. Alfalfa's essential oil is rare. Hoodoo specialists use it as both a money-drawing herb and protection for existing assets. It's added to spells and charms in its dried form. Alfalfa represents pleasure and enjoyment of life.

Alfalfa is a feminine herb and associated with the earth element. It is ruled by Venus.

-To protect home and all who dwell within from hunger, poverty, and unhappiness, keep a small jar of alfalfa in the kitchen cabinet or pantry.

-To protect property, burn alfalfa and scatter the ashes around the outside.
-Weave alfalfa strands to make an amulet to protect against poverty.

-Add alfalfa to cooking to bring money into the home, and general grounding.

Alfalfa Leaf is said to bring luck to deals involving banks when carried in the wallet.