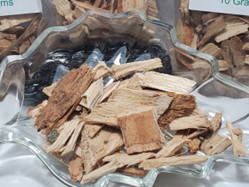 Ash trees are prone to lightning strikes, making the tree associated with the elements of fire and air.

Druid wands and staffs were often made of Ashwood because of the straight grains. Nemesis used Ashwood to represent the justice of the Gods. In Celtic lore, the Ash tree is the World Tree. According to Hellenic legend, the Meliae were ash tree nymphs. The trees and their nymphs appeared from drops of blood when Cronus castrated Uranus. Later, they acted as nurses to the infant Zeus.

Several traditions mention Ash for making wands and staves, and it is mentioned in some sources as a traditional wood for making besoms.

Spiritual cleansings can be done with its leaves chips of the wood. It has been used as protective amulets. It is a symbol of stability and security. Ash does not tolerate those who rely solely on spirituality, forgetting the other side of life.

Ash is used in sorcery and magic, making use of this plant, breaking spells, spells, and expelling malign presences (astral larvae, adverse thought forms) The use of Ash is in any form from the tree itself to American Ash Chips.

Smudging with this is an excellent defense from attacks of occult and malefic influences. Traditionally it is considered the best wood for making healing sticks and talismans. American Ash Chip can be a great addition to a poppet.