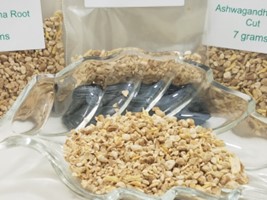 Ashwagandha has well over 4,000 years of traditional use in India, Pakistan, and Sri Lanka.

Often referred to as "Indian Ginseng," it is traditionally used in conditions of weakness.. It is also referred to as Winter Cherry. Roughly the name Ashwagandha is translated as "the smell and strength of a horse," referring to its aphrodisiac properties. The plant is a Tonic and an Adaptogen. Culturally the Middle East has used it to help normalize sleep patterns.

Even though it is sometimes called "Indian Ginseng, the two are not related.

Ashwagandha is also known to aid in rejuvenation and longevity. This herb's natural properties can help calm and boost stamina. It restores balance in the body. The herb is called Rayasana in the Ayurveda tradition; it translates to an 'herb that rejuvenates.'

Ashwagandha, aids in the physical, mental, and spiritual journey; it can also aid in Third Eye Awakening experiences. Ayurvedic practitioners used various herbs to assist with the opening and balancing of the Chakra centers. Ashwagandha is traditionally used to strengthen and unblock the Root Chakra. This practice is a vital part of the Third Eye Opening process; one must be rooted for spiritual experience and simultaneously grounded. Rooting creates an energetic balance. This is an essential trait when raising kundalini energy, downloading information from the fourth dimension (astral plane), Fifth Dimension (collective conscious), sixth dimension (sacred geometry), seventh dimension (cosmic sound), and the eighth dimension (divine mind).

Ashwagandha is a sacred herb and has been used in India for thousands of years to strengthen bones and increase spiritual wellbeing. Ashwagandha is the backbone of Ayurveda and is known to be perhaps the most powerful herb. In Vedic Sanskrit, Ashwagandha's name is compared to the strength and fortitude of a stallion.