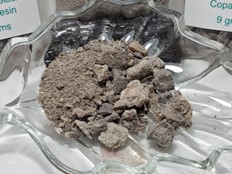 Black Copal Incense is known in Mexico as an Incense burned on the Day of the Dead. It has a heavy scent similar to Myrrh. It has been used for removing darker energy and exorcisms. Charcoal discs are highly recommended when using resins.

Copal Resin is one of the oldest forms of energy cleansing and is the best method of cleansing crystals and spaces. It is a natural tree resin in two states, but it is not either a hard resin or sap. It is considered sacred to the people of Mexico, South, and Central America. Copal has a very long history in the spiritual and metaphysical realm for removing negative energy, restoring a sense of peace and calm.

One of the uses of Black Copal Resin in Southern Mexico is in ceremonies with sacred mushrooms or in a sweat lodge. When the Spanish first arrived in Mexico Black Copal Resin was used in Catholic churches as a replacement of Frankincense.

According to a report from a 16th century Spanish Friar, named Bernardino de Sahagun, the Aztec people would mix copal with calcium phosphate to make teeth that had stones attached, Copal was also used for makeup and as an adhesive to hold masks on.

Copal comes from the Protium Copal, named due to the resin and part of the Bursera tree family, this tree is native to the Baja region of California. In more modern times Black Copal Resin is used for more then just spiritual use such as to ward off mosquitos.