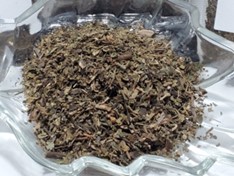 Most herbs are considered magical in their own unique way. Black Walnut leaf, in particular, is used in rituals regaining Health, Mental Powers, Infertility, and granting wishes. Witches used to dance beneath walnut trees in Italy during their secret rites. It is a highly respected tree in magick tradition.

Black Walnut Leaf has a history of Native American tribes going back centuries for various uses including herbal salves and tinctures.

Part of the connection to love and fertility may be associated to the chemical that is produced from the Black Walnuts, Juglans which in latin mean "Nut of Jupiter".

The ancient Greeks apparently believed this to be a fact as it seems that they would make a stew with the Walnut as the main part to increase Fertility. The ancient Romans actually veiwed the Walnut as more of a feminine aspect more associated with Juno. An ancient Roman custom was to throw walnuts at a bride and groom to boost fertility.