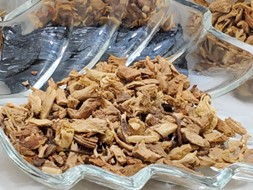 Three ladies come from the east,

One with fire and two with frost.

Out with fire, in with frost.

This is an old chant to Brigit, the ancient Celtic Goddess of poetry, healing, and smithcraft.

Blackberry Root is from the Blackberry bush, also called brambles, is a common native plant found in fields throughout much of the eastern U.S. The root bark and the leaves are used medicinally as an antioxidant, anti-inflammatory, astringent, depurative, diuretic, tonic, and vulnerary.

Blackberry Root has been used for spells and rituals to enhance or bring knowledge. The knowledge that the Blackberry Root helped to attain would depend on the intent of those taking part in the ritual or spell.