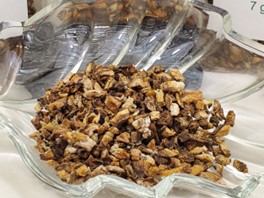 This persistent Old World herb spread into North America, where it foraged as folk medicine and occasional food source. American conjurers and rootworkers adopted Burdock into their magickal herbs collection, elevating its status as a Witch's herb.

Folk herbalists considered dried burdock to be a diuretic, diaphoretic, and blood purifying agent. Burdock is a traditional medicinal herb used for many ailments. Burdock root oil extract also called bur oil, is used in Europe as a scalp treatment.

When placing spiritual protection around the home Burdock Root can be added around the outside to assist in warding away negative energies. Rituals and spells can use Burdock Root in the casting or as an incense while the spell or ritual is taking place to give protection to a person or place.