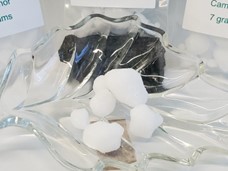 Camphor has a wide variety of topical uses due to its antibacterial, antifungal, and anti-inflammatory properties. Camphor can treat skin conditions, improve respiratory function, and relieve pain.

Camphor, scientifically known as Cinnamomum Camphor, is a combustible, translucent white solid with a piquant smell and sour taste, though some people quite like its menthol-like, nose-tingling fragrance.

Camphor is obtained from the bark of the tree Cinnamonun camphora. Only 50-years old trees produce a waxy substance that is used as camphor oil. The process of steam distillation is used to extract camphor oil from the stems of the tree. The camphor tree is said to be a native of Hiroshima, Japan. It is evergreen and now grows all over Asia, primarily in Indonesia. The Indonesian variety is named Dryobalanops camphora.

Camphor can be used in multiple ways. It is considered an essential ingredient in vapor rubs, balms, and salves as the oil is said to alleviate pain and reduce itching. It also helps in keeping cockroaches, moths, and other insects at bay from our wardrobes. Camphor is used in religious ceremonies too. Besides, it is beneficial for the skin and hair.

The Camphor tree has long been considered to be a sacred plant with the ability to cheal. It is a revered tree in cultures across Asia and India. Camphor is considered to be a spiritual healer and an uplifter of emotions. When using Camphor some say they feel liberated of some obligations and a higher spiritual connection.