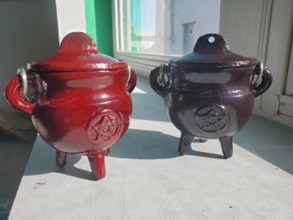 The Trinity Knot or triquetra was used to symbolize and honor the Mother, Maiden and Crone of the neo-pagan triple goddess. It signifies the three life-cycles of a woman in relation to the phases of the moon. In more recent times, it has come to be recognized as a symbol for 'The Father, The Son and The Holy Spirit

Displaying a Triquetra on both its front and back sides, this Cast Iron cauldron custom painted is a powerful symbol of the goddess. Representative of creation and rebirth by itself, the three points of the Triquetra are also frequently used to represent the Maiden, Mother and Crone as well as mind, body and spirit and even birth, life, and death.

Incorporating magickal objects into rituals and spellcraft, a piece of Iron is essential; many altars have at least one piece of Iron placed upon them. A cast-iron cauldron is traditional and handy for any modern witch, for tasks ranging from burning herbs and incense to magickal scrying and divination to kitchen witchery and cooking magick. Iron is a symbol of strength, protection, and life-giving warmth, as it is seen as a combination of Earth and Fire elements. Iron was once the most durable metal known to man, and this was reflected in mythology and folklore.

In one of the myths Thor's hammer, Mjolnir, was forged of Iron, and even in the Norse myths, the legendary heat retention properties of Iron were demonstrated: the hammer would become so hot when thrown, Thor wore iron gloves to protect his hands. The legendary strength and durability of Iron make it a natural component in spells of protection.

Many a witch obtains Iron items, such as antique keys, padlocks, or spikes, and places them by the door of his or her home to keep out poltergeists and other unwanted spiritual visitors. The Cast Iron Cauldron, Triquetra or Pentacle is a strong source of protection against a major portion of negative energies and entities.

The Cast Iron Cauldron Custom Painted Triquetra or Pentacle is surrounded in beliefs both for the symbols and the Iron they are made from.