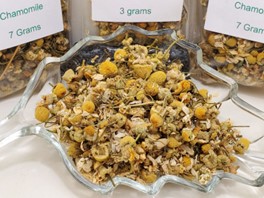 Chamomile flowers usually bloom into little white flowers with yellow centers that resemble mini daisies. The chamomile flowers sit atop long thin stems that shoot up anywhere from 6 to 24 inches from the plant’s base. The German chamomile flowers give off a strong, herbal, and sometimes intense scent. The scent of Chamomile alone has a tendency to cause people to feel relaxed and for some sleepy.

Chamomile is well known for the effects of relaxation and aiding in sleep. Chamomile is so well known for this effect tha it is often paired with Lavender and Melatonin. Chamomile has been used as a relaxant throughout history, and was chosen due to historical use to aid in our Lady Star Fawn Anxiety blend as well as in Dragon's Eye Calming Mix.

Chamomile can be used in spells and rituals to cleanse negative energies that have been directed at a person. When mixed with other herbs for removing a curse Chamomile not only helps to remove the curse but also calm the energies in the area.

Those who carry a sachet or charm for luck, should consider adding Chamomile to them as it is said to attract prosperity. Rituals and spells to enhance prosperity to a person or location can also use Chamomile.

Offerings of Chamomile to Deities can be done to the ancient Greek God Hypno - the Greek God of sleep, or to Fortuna the Roman Goddess of luck and prosperity. Offerings to Hypno are said to be most effective at dusk, when the sun and the Greek Sun God Apollo go to sleep according to ancient beliefs.