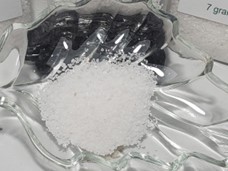 Dead Sea Salt has been prized for its therapeutic benefits as well as its cosmetic uses.

Dead Sea Salt has been in use since Biblical Times. Research into general Dead Sea benefits and the minerals found in Dead Sea Salt has shown a 40% reduction in the wrinkling depth. The minerals also moisturize, detoxify, and soften the skin and enhance the body's relaxation – making us look younger but feel younger as well.

Dead Sea Salt have an extreme content of salts and minerals that surpasses everywhere else on this planet. Dead Sea Salt's benefits have been clinically proven to help with dry skin, psoriasis, eczema, arthritis, muscle aches, and pains, to name but a few. To name some of the minerals that Dead Sea Salt is made up of: magnesium, sodium, potassuim, calcium, and sulfates.

A natural method to attain the healing assistance from Dead Sea Salt for those of us unable to visit the Dead Sea is to do salt baths. These salt baths containing Dead Sea Salt are a great way to cleanse before or after rituals, purify after a harsh day, in a meditation practice for higher spiritual awakening or simply to relax and calm yourself. When mixing Dead Sea Salt try using essential oils or dried herbs that will help enhace the Dead Sea Salt properties such as: Lavender Flower, Rosemary, Peppermint, White Sage or Patchoili.

Dead Sea Salt can be used in charms for protection against both the living and the deceased, negative energies will have a hard time getting past the protection lines of Dead Sea Salt placed along doorways and window sills.