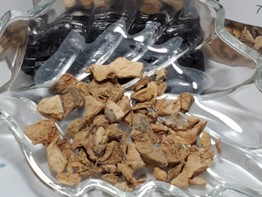 Ginger Root is used to invoking the powers of fire. Ginger is a catalyst, a force of fire. It is also believed to conjure the powers of Mars and the Sun and raise the Chi. The use of this magic root in baked goods is preferred to replenish our magical energy. It is also used to prepare food as a libation to Sun and Fire entities and deities. Meditate on your desire (love, protection, magical powers, healing etch) and start chewing a piece of Ginger Root. Keep on visualizing your desire. Finally, spit it.

It is used as a ‘magical catalyst‘ (like cinnamon) to ‘speed things up.’ The Ginger Root is used extensively as a tool to bring forth prosperity and banish poverty. When chewed, drank, or eaten, it is believed to help us raise more magical energy. Because of the correspondence with fire, ginger is thought to be a potent aphrodisiac.

Ginger Root is also used to prepare food as a libation to Sun and Fire entities and deities. Charms or spell jars to assist building connections to Deities such as Ra or Apollo work well with Ginger Root in them. Deities of Fire include Hephaestus, Vulcan, Hestia, and Helios. Using Ginger Root in rituals or spells to the Deities of Fire or for the Element of Fire. Charms and spell jars to build the connections between a person and the Deities or a stronger connection to the Element of Fire.