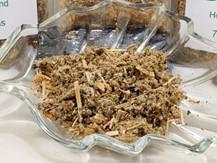 Horehound is a bushy plant that grows nearly 2 ft (61 cm) tall from a short, stout, and woody root. The small oval leaves are bitter to the taste, with a musky aroma. They are wrinkled and dark green on top and pale with downy white hairs on the underside. The leaves are opposite and deeply veined, growing on hairy, square, branching stems also covered with silky white hairs. The lower leaves of white Horehound have long stalks, while the upper leaves are smaller and stalkless.

Horehound is said to be associated with the Egyptian God Horus, offerings of Horehound to Horus could be done to assist with seeing that which is to come or just to gain the God's Favor.

Sachets and Charms containing Horehound can be used for protection and to ward off the unwanted intents of others. During a removal of an entity Horehound can be spread in rooms that have been cleansed to keep the negativity from going back in or as a way to try and push an entity out of a room. For extration mixes Horehound can be a nice addition to herbs such as Mugwort.