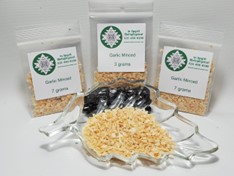 Garlic is one of the most ancient medicines in the world. Antimicrobial and detoxifying, garlic kills foreign bacteria, improves digestion, and stimulates metabolism. Good for cardiac and digestive health. Also known to help nervousness, anxiety, insomnia, and weight loss.

Romanians would use garlic to prevent evil spirits from entering a body by anointing the deceased with Garlic and even place some in the mouth. Many other countries used Garlic to ward off negativity, China and Malaysia cultures had parent smear the heads of children with Garlic to deter Vampires away from them. The West Indies make charms against various evil spirits containing Garlic. Witches over in Italy would use Garlic to ward off hexes and curses, some witches would even use Garlic as a means to protect against the common cold.

Garlic is still used in modern times to protect from negativity, by laying a line of Minced Garlic at the front door is a way to repel theives, prevent jealousy and envy. Hanging Garlic in a new home is a way to bring blessings. Minced Garlic is a favorite to some Kitchen Witches as it is a way to protect their guests and to ensure that no one is bringing something negative into their homes.