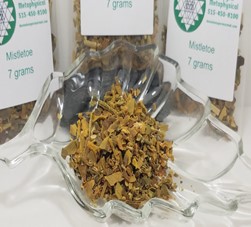 Mistletoe has been used for thousands of years by many cultures.

The Druids used the mistletoe, mostly when it was found growing on an oak. It was cut on Midsummers Day, or when the Moon is six days old, with one cut of a gold sickle. The mistletoe was not allowed to touch the ground.

It is not always used as a Christmas decoration. Its romantic roots are based on the claim that it could make barren animals fertile again.

However, mistletoe has some negative implications, as some plant varieties are poisonous, so people should not eat them.

Mistletoe does not have a root system that connects to the earth, so it is thought to be between two worlds.

It is known that hanging it in your home would protect against evil, lightning strikes, and even fire. Hanging over a bed is believed to bring peaceful rest and good dreams. It is also said that mistletoe can open a gateway between the living and the dead because it is considered dusk until dawn herb.

Mistletoe is one of the most widely used herbs in alternative medicine for a variety of conditions.