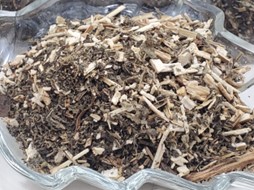 Motherwort is an herb that historicly has been used for emotional support and mending a broken heart. The soothing effects of Motherwort is said to be like recieving a big bear hug when one feels down. This soothing effect can assist us in dealing with stress and feeling more balanced. Motherwort as a mood lifter keeps us steady and feeling stay centered when life gets tough.

Motherwort could be used in a tea to assist and sooth times of stress such as when making major changes in ones life. While Motherwort can be used in teas it is not recommended to be smoked as it is known to cause seizures.

Motherwort is native to Europe and the Central regions of Asia and has been cultivated there for generations. Motherwort has since ancient times come to grow in the wooded areas of the United States. The original intent that is said as to why Motherwort was brought to the United States is to attract bees to areas to assist in pollination.

The ancient Greeks - according to reports - used Motherwort on pregnant women who were suffering anxiety. Motherwort has had an association with longevity and has been used in spells and rituals to try and extend and better lives.

Herbalists around the world still recommend Motherwort to assist people in times of stress or heartache. Some herbalists will recommend using Motherwort to sooth anxiety. We strongly recommend discussing with a doctor the intended use of hebal remedies as some herbs have been known to counteract medications.