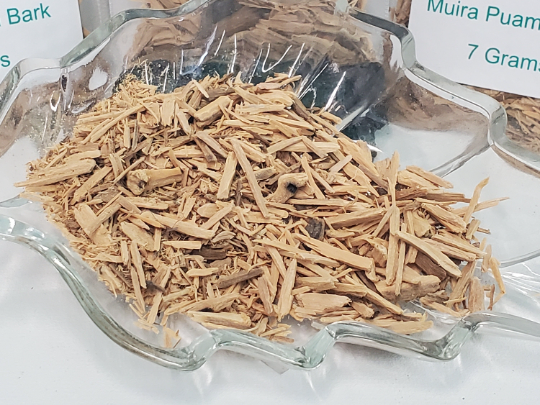 It has been referred to as the “Viagra of the Amazon” Muira Puama has an enduring history of traditional use as an energy tonic remedy for impotence and offers a natural therapeutic approach to the loss of libido in both men and women.

In Europe, it also has a long history of use as an anti-rheumatic, aphrodisiac, a tonic for overall health and gastrointestinal disorders.

This plant was studied by Siqueira et al. for its effect on the central nervous system. It was found that “Muira Puama roots possess various central nervous system activities, including mild anxiogenic effects” – meaning that they help to stimulate the CNS, which can lead to increased mental performance and physical stamina.

Muira puama is employed around the world today in herbal medicine. Early European explorers noted the indigenous uses and the aphrodisiac qualities of muira puama and brought it back to Europe, where it has become part of herbal medicine in England. It is still listed in the British Herbal Pharmacopoeia (a noted herbal medicine source from the British Herbal Medicine Association) for the treatment of dysentery and impotence. It is also used in Europe to treat impotence, infertility, nerve pain, menstrual disturbances, and dysentery. In Germany, muira puama is employed as a central nervous system tonic, for hookworms, menstrual disturbances, and rheumatism. Muira puama has been gaining in popularity in the United States, where herbalists and health care practitioners are using it for impotence, depression, menstrual cramps and PMS, nerve pain, and central nervous system disorders.

The short term effects of Muira Puama include increasing blood flow to the pelvic area, aiding erections in men as well as sensation and orgasm in women. Longer term use enhances the production of sex hormones in both sexes.

While so-called aphrodisiacs have come and gone in history, muira puama has retained its stature and may well provide one of the more effective natural therapeutic approaches for erectile function and libido enhancement for both sexes. Before trying to self-treat, however, men should always seek the advice of a health practitioner if suffering from erectile dysfunction or impotency; this often can be an early warning sign of vascular insufficiency and/or underlying heart problems.

Preparation: Can be taken as a tea, but more effective if used as a tincture. Take muira puama the tincture with a small amount of warm water to which you have added a little lemon juice. This assists absorption of the therapeutic tannins. Another convenient form is a capsule.