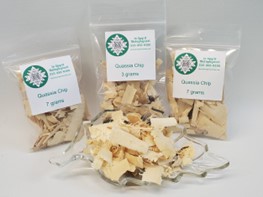 Quassia is used for treating anorexia, indigestion, constipation, and fever. It is also used to rid the intestines of various worms, as a tonic or purgative, and as a mouthwash. Some people apply Quassia directly to the scalp for lice.

Quassia Wood Chips are used for a wide variety of herbal remedies. The Quassia Herb can be used in tea form (very bitter), Tincture, salve, paste, and various types of extract. The use of Quassia medicinally and cosmetically dates back at least to the 1700s

Quassia is a intensely bitter herb, the known original use was for fevers. Later it began to be used for digestive issues, however only in small doses. Another method of using Quassia is as an insecticide, which some believe shows that it can ward off negative entities.

Use caution if using Quassia Chip to draw in love, as Quassia Chip is said to be an herb to enable controlling effects. Love spells that use Quassia Chip in this manner may be considered as a curse to some, the reason is because the victims free will is subdued.

Pregnancy and breastfeeding: Quassia is LIKELY UNSAFE when taken by mouth during pregnancy or breastfeeding. It can cause cell damage and nausea.

There is not enough reliable information about the safety of applying Quassia to the skin or scalp you are pregnant or breastfeeding. Stay on the safe side and avoid use.

Don't use it if you have one of these conditions: Digestive tract problems or diseases, such as stomach or intestinal ulcers, Crohn's disease, infections, and many other conditions in large amounts as Quassia Chip can irritate the digestive tract.