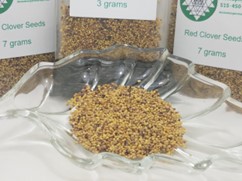 The red clover herb is a perennial plant that is native to central Asia, Africa, and most of Europe. Red Clover is one of the world’s oldest agricultural crops, cultivated since prehistoric times, and has a long history as a religious and magical symbol; it has a long history of being nutritious cattle fodder, as well as a medicine. Due to its many beneficial uses, it has been naturalized in Australia and North America.

In the past Red Clover Seed has been used to treat various ailments, such as indigestion, upset stomach, cold, cough, asthma, and bronchitis. Due to its isoflavones content, red clover is also great for treating menopausal symptoms in women, such as hot flashes, as well as prevent osteoporosis. It can relieve PMS symptoms and reduce menstrual pain as well. Aside from feminine health, this herb can also help maintain cardiovascular health. It can lower cholesterol levels and control high blood pressure. Lastly, due to its high antioxidants content, red clover consumption may prevent cancer.

One use of Red Clover Seed is in a ritual bath to cleanse ill-luck and attract prosperity towards a person. In Victorian era flower language the Red Clover was said to mean success, prosperity, love, protection, consecration and exorcism. Red Clover Seed can be used to both rid an area of negative entities and energies while at the same time making the area a sacred place.