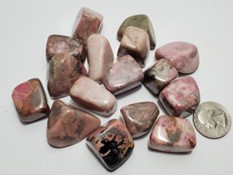 Rhodonite is a stone of compassion; it brings an emotional balance that clears away emotional wounds and scars from the past and nurtures love. It stimulates, clears, and activates the heart. Rhodonite grounds energy, balances yin-yang, and aids in achieving your highest potential.

Rhodonite is known for its capacity to bring emotional healing and release blocked energy from within the heart chakra. It has strong heart-based power with a sound healing vibration.

It is a member of the Pyroxenoid mineral family. Massachusetts has designated it as the state’s official gemstone. Rhodonite was discovered during the 1790s in present-day Russia. The stone was first mined from the Ural mountains. Rhodonite is still mined in the Ural mountains, mostly for ornamental uses, other areas that Rhodonite has been found in Sweden, New South Whales, the United States, Argentina, Australia, Brazil, Canada, England, India and Peru. Even with the new locations Rhodonite is still considered to be an uncommon stone.

In its natural state, it can have many jagged edges. It reminds one that true love is like the rose, is often thorny but holds a refined beauty. Also, that regarding relationships must be.

When Rhodonite is worn or carried, it helps to cleanse emotions of negative influences and helping a person to overcome fear by boosting the self-confidence. Rhodonite can be a great stone to have after a breakup, because no matter the reason both sides take a hit to self-confidence and self-esteem along with self-love..... all of which Rhodonite is said to help boost and bring back into balance.

Meditation with Rhodonite can be very beneficial for the Heart Chakra, allowing the energies of love to flow and encourage trust. The Heart Chakra is the most common Chakra to get knocked around with every day life, why not give it a little boost to improve your life.