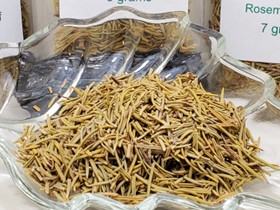 Rosemary has been one of the most essential Old World magickal herbs for a long time. Since ancient times it has been used for cleansing and purifying incenses. Associated with Aphrodite/Venus (Rosemary's name means "dew of the sea" in Latin).

Later, it became linked to the Virgin Mary, who is said to have given the plant its blue blossoms when she rested her blue mantle on a bush. Rosemary was worn by medieval brides and carried by wedding guests as a token of love and virtue.

An old saying has it, "Where Rosemary grows, the woman rules." It was said that Rosemary would only flourish in a garden where the lady of the house wore the pants.

Many Christians believe that Rosemary echoed the life of Christ, growing for 33 years to the height of a man, then perishing.

Rosemary stands for remembrance as Shakespeare wrote in Hamlet. (Recent research has suggested the scent of Rosemary improves retention and recall of facts.) Rosemary extract is used medicinally to cure all manner of ailments and cultivated for its spiritual powers of protection and cleansing.

In hedge-witchery, Rosemary is a garden-friendly substitute for exotic Frankincense. Witches procure fresh Rosemary from gourmet markets and herb gardens. Rosemary appreciates regular trimming. The boughs can be gathered and preserved but will mildew in humid conditions. Dried Rosemary is preferable for incenses and sachets.

Rosemary produces copious volatile oils; its essential oil is inexpensive. Synthetics are rarer than the real thing. The chemical composition of the oil depends on the variety of Rosemary used, with some formulations containing up to 20% camphor.

In Old World witchcraft, Rosemary is burned to purify a room or ritual space before magickal workings.

Burn Rosemary and Juniper together to drive the staleness from home after a long and lingering illness.

Rosemary is helpful for all spells to accelerate learning in school or work. Sniff a sprig of Rosemary while studying to improve your performance on an exam.

Cleanse and consecrate athames, wands, and crystals with Rosemary oil. (Frankincense oil is traditional for this purpose, but Rosemary may be a better choice for the Green witch.)

Rosemary sprigs are pliable when fresh—weave them into garlands and wreaths for home blessings and handfastings.

A Rosemary Leaf ritual bath or "tub tea" may aid in the removal of worries and invigorate the spirit. You can also drink Rosemary tea for this purpose, but the taste is quite bitter.

A Rosemary bush in the garden may help to attract elves and repel thieves.