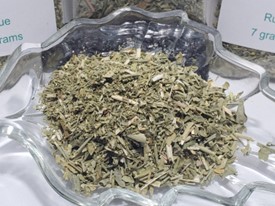 Ruta graveolens is a perennial plant of the aromatic variety that is recognized for its yellow-green flowers. Although many species are identified, the most well-known is called common Rue (Ruta graveolens), and one of this plant's most characteristic traits is its substantial toxicity. That's why you must control its uses and the amount consumed.

Old folk use of Rue is to place some leaves of Rue on the forehead of a person that is suffering from a headache or migraine. A protection use of Rue is to place dried leaves around windows and door to ward against negativity in a home. Those that carry a sachet containing Rue are said to be protected from the negativity directed at them. Charms can be worn or placed around a home to protect and ward against negative entities that would try to attach to a person or place.