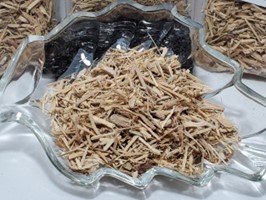 It can be burned as an incense of elemental Air or brewed as tea or taken in a capsule form. Use it in your spell recipes to draw money, health, break curses and attract love. A bit of Siberian Ginseng and a Red Candle, combined with some Mars Incense, should go a long way.

Siberian Ginseng has been traditionally used to prevent colds and flu and increase energy, longevity, and vitality. It is used in Russia as an "adaptogen." An adaptogen is a substance that is supposed to help the body better cope with either mental or physical stress.

Another critical action of an adaptogen is "immunomodulation" – a process by which an immune response is altered to the desired level. This is partly achieved by recharging exhausted adrenal glands - when these glands become overtaxed, leading to different systems in the body breaking down.

Siberian ginseng consists of a group of glycosides known as eleutherosides. The evidence is mounting that Siberian Ginseng enhances and supports immune system response, making it a possible natural alternative in the long-term management of various immune system diseases. German research has shown that it increases lymphocytes – essential components of the immune system which act as the body's primary defense against viral infections. They found that Siberian Ginseng significantly increases the activity and number of CD4 cells, a subset of T-lymphocyte cells, whose proper action is crucial to the ability of the immune system to function normally.