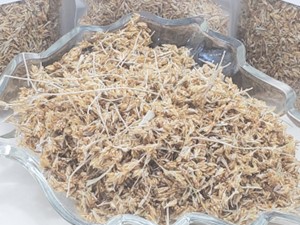 Salvia argentea has a broad spread of basal leaves that measure 1 m (3.3 ft) wide and 30 to 60 cm (0.98 to 1.97 ft) high. The individual leaves are 20 to 30 cm (7.9 to 11.8 in) long and 15 cm (5.9 in) wide. Both leaf surfaces are heavily covered with silky hairs that give it a wooly appearance. The leaves are soft to the touch, first emerging as a distinctive silvery-white and then turning to grey-green after flowering. Cold weather in the fall turns the leaves silvery again.

This natural, freshly picked sage has long been used in smudging ceremonies, helping to connect the healing powers of mother earth. It is used to cleanse negative thoughts and the dark from people, objects, and dwelling places. Silver sage emits a moist, cool smoke that centers, grounds, and brings clarity while encouraging action. Light and burn in a smudge bowl or use in cleansing ceremonies.

Silver Sage Flower and Seed is said to command the attention of our spirit guides. Sage smoke carries our prayers and intentions as it purifies our inner and outer environments.

Silver Sage Flower and Seed smudge is cherished by the Chalone and Tamarron peoples of California. It is considered a magical plant for cleansing, purification, and protection. It has been used for sweat baths and evoking nature spirits.

Burning sage is one of the oldest and purest methods of cleansing a person, group of people, or space. Native American sage burning is the most commonly recognized form today; nevertheless, it is a practice in other cultures too.

From the ancient Celtic druids who used sage as a sacred herb alongside Oak Moss for burning as well as medicinal purposes, to the Indigenous Peoples of the Amazon whose Palo Santo (holy wood) sage burning ceremonies are still practiced to this day.

Our Silver Sage Flower and Seed is harvested from family owned land and is bagged in our Ames, Iowa Store.