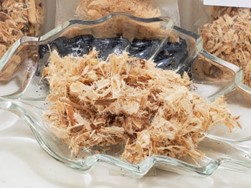 Slippery elm is a tree native to the central and eastern United States and Ontario, Canada.

The tree is known for its dark brown to reddish-brown bark and can reach a height of 60-80 feet. Native Americans would peel its slimy, red inner bark from twigs and branches and use it as a remedy for many common ailments, like fevers, wounds, and sore throats.

Slippery Elm Bark has been used as an ingredient in balms and salves to assit with recovering from injuries and illnesses.

It is said that placing Slippery Elm Bark in the corners of a home will assist in warding negative entities and energies away keeping those within safe. Slippery Elm Bark has been used in the past and still is used currently for assisting in exorcisms. Some practices use Slippery Elm Bark for spell breaking and counter spells.

Charms of persuasion can be created with Slippery Elm Bark inside to be worn by adults to assist when wanting to be more effective when trying to be convincing, this could be useful for those in sales.