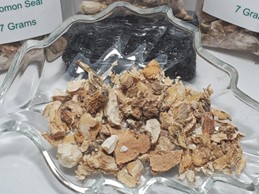 Solomon's Seal can help in making difficult decisions and accepting and seeking change. It helps in spellwork to aid changing/breaking habits and helps in smooth transitions for changes. It has been used in love potions to amplify commitment between partners and "seal" a spell or a sacred oath or promise.

The root, when carried as an amulet, can ward off malicious spirits and increase wisdom.

We recommed caution if using Solomons Seal to summon anything as negative entities can try to trick people into removing the Solomons Seal and thus removing the protection. Spray infusions of Solomons Seal can be used to ward ritual or spell areas from all forms of negativity, while allowing for the altar or ingredients to be set and ready for use.