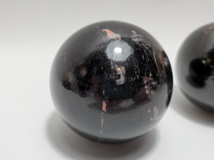 Mica helps us recognize flaws without self-condemnation so we are able to effectively address negative personality traits. (After all, you can't change what you don't see.) According to metaphysical beliefs, mica is also used to reduce hostile or nervous energy, bringing a calm to those in need.

Garnet revitalizes, purifies, and balances energy, bringing serenity or passion as appropriate. Inspires love and devotion. Garnet balances the sex drive and alleviates emotional disharmony. It activates and strengthens the survival instinct, bringing courage and hope. Garnet is a stone of commitment.

When entering into a new relationship the Tourmaline Mica Garnet Sphere will assist you in aspects of protection from others jealousy, remaining calm and focused, and the garnet helps to commit to the relationship when ready to take the next step. So this one sphere combines all the benefits of each material to create a powerful stone to assist you with many different challenges in your life.

Tourmaline Mica Garnet Sphere is a great stone to meditate with as it will help work on your Root Chakra, Sacral Chakra and Heart Chakra.

Tourmaline Mica Garnet Sphere is a beautiful piece and can be a great conversation starter, but for those who are performing their practice in secret the Tourmaline, Mica, Garnet Sphere can appear to be a beautiful decoration for the home or room.