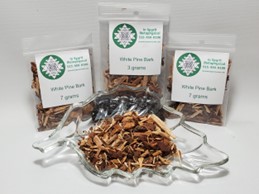 White Pine Bark, also known as Pinus Strobus, has powerful medicinal resin in its bark. It is also a powerful ingredient assisting with healing, protection, fertility, money, prosperity, exorcisms, and cleansing in magic.

"In the Haudenosaunee (Iroquois) legend, there was a terrible conflict between five different nations of people. This conflict was rooted in cycles of pain, revenge, and chaos. A messenger of peace sent from the Great Spirit, the "Peacemaker," sought to unite the five warring tribes. After convincing them to unite, they came together to make peace, but they still carried their weapons. The Peacemaker uprooted a White Pine tree and had them throw all of their weapons into the hole. He then replanted the tree, and the underground waters carried away the weapons. The needles grew in clusters of five on the tree to represent the five nations who came to find peace. The tree roots spread out in four directions: the north, south, east, and west; the roots are called the roots of peace. An eagle perched on top of the tree to watch over the roots of peace. Under the tree, the branches spread wide for all to gather. From this Native American story, we can understand why the White Pine, Pinus Strobus, is called the "Tree of Peace."

White Pine Bark is a symbol often associated with healing, wayfinding (the finding one's life purpose, a home, the path), protection, and purification, a spiritual cleanser. Burning pine wood can be used to clear a new home of unwanted spirits. Pine trees are emotional protection and healing, the balance of strength and softness, vitality and continuity.

White Pine Bark can be added to an extraction mix to help remove any negative energies or entities in an area or person.