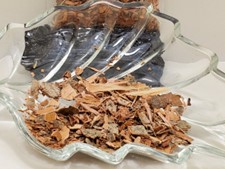 According to workers of Love Magics, Witch Hazel Bark can be carried to assist in mending a broken heart. Other methods of use include for spells and rituals to increase or enhance a person's wisdom, inspiration and beauty.

When doing divination for finding that which is lost, Witch Hazel Bark is a known ingredient in mixes to assist in the focus.

Deities that have been associated to Witch Hazel Bark are Apollo, Horus and Lugh. Placing Witch Hazel Bark on an altar for any of these Deities can assist in building a stronger connection.